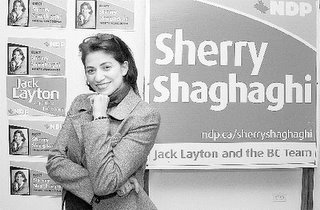 Sherry Shaghaghi is an energetic effervescent individual who just happens to be the first Iranian-Canadian running for federal politics.
I first met her at a dim sum lunch in Vancouver with friends.

I was immediately impressed at how honest and intelligent Shaghaghi is.  She is committed to helping others in the community, working as a counsellor.  She has helped settle many Iranians to make adjustments to Canadian culture, and she was one of the first people I contacted when Global National News was looking for immigrants who had challenges gaining “status” in Canada.  As well, Sherry is a committed “foster parent”, and she spends time with a young mentally challenged woman.  Everybody speaks highly of her – even strangers.  I was also very impressed that Crawford Kilian, the noted author and instructor from Capilano College is handling communications for her campaign.

The large picture in the Vancouver Sun story featured Sherry Shaghaghi
who had also run in the municipal Elections as a councillor for North
Vancouver District – but wasn't elected.
Saturday's January 7th Vancouver Sun ran a feature article with the headline:

Vancouver Sun:  They're finding a reason to run:

Minorities and women make up a low percentage of political candidates, but all are determined to make an impact.

For more details of the article click on www.northvancouverpolitics.com

North
Vancouver NDP candidate Sherry Shaghaghi left Iran in 1985 to escape
the oppressive rule of the ayatollah Ruhollah Khomeini and to pursue a
more democratic life.

“I left Iran at a really tough
time,” said Shaghaghi, a clinical counsellor. “I wanted to be someone
that could make a difference in people's hearts and have a voice . . .
I couldn't see, at that time in Iran, such a possibility.”

However,
she said many new Canadians may still feel too limited by the religion
of their home countries to consider running for office. She believes
that if the federal government did a better job of assisting new
immigrants with integrating into society, such as helping them study
the language and culture, people might be less intimidated about
entering politics.

“There is very little provided for
their orientation — what to do in the new country,” she said. “The
cultural differences can be quite huge.”

I attended Sherry's campaign office open house where it was well recieved and given an enthusiastic compliment by www.northvancouverpolitics.com blogger Barry Forward who wrote: 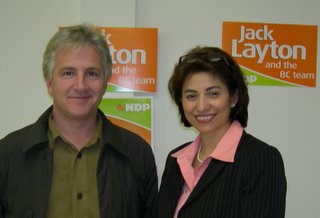 campaign office in Lower
Lonsdale (225 Lonsdale) clearly offered up wild card for this election.
About the same number of people attended this campaign launch party as
attended both Silver's and Bell's, but there was something different in
the air at this one. An air that this candidate represents something
new for the North Shore, a new energy on the local political scene, and
one that we could hear from for many years.Shaghaghi's chances
of winning the North Vancouver riding for the NDP this time around
probably aren't that good (remote some might say) but if the New
Democrats are able to get their machine behind this candidate and raise
her profile, she could very well play a role in the outcome of this
election.

Campaign recommendation to other candidates: Do not
agree to any all-candidates meetings where your supporters might get a
chance to meet Sherry Shaghaghi, they might just be won over by her
positive and infectious attitude.