Barack Obama is now president-elect for the United States.  The media keeps saying that he is the first Black-American president.  But is this true? 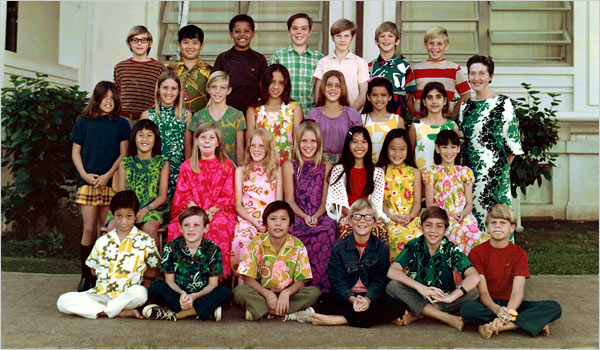 Barack Obama, third from left at rear, in 1972 with his fifth-grade
class in a photograph from Na Opio, the yearbook of the Punahou School.

If Barack Obama's mother was a White American woman from Kansas, and his father was
a Black man from Africa – doesn't this make him a
Black&White-American?

If American speed skater Apolo Ohno became U.S. president, would they
say he was the first Eurasian president?  Or the first Asian-American
President? Or the first President of Japanese ancestry?

Since Obama was raised in Hawaii, isn't he really the first Hawaiian
President?  ….The way that George Bush was a Texan president, Jimmy
Carter was a Georgian president, and Bill Clinton was an Alabaman
president?

I think it is so fitting, that Barack was raised in Hawaii.  I have
always found Hawaii to be a very inclusive multi-cultural society.  So
many people from all around the world have settled in Hawaii, including
Japanese, Chinese, Filipinos, Samoans, Portuguese, Caucasians… and
Americans…. and Canadians too!

In Hawaii, if you are half-white, you are called a “Hapa Haole.”  The
term “Hapa” is now used to describe people who are of mixed Asian
ethnicity.

In Hawaii, there is the “Aloha Spirit.”  “Aloha” is the Hawaiian word for “hello.”  And it also means “Love.”

Obama has a half-sister who is half-Asian.  In a March 17, 2007 New York Times story Charisma and a Search for Self in Obama’s Hawaii Childhood, she says:

“I think Hawaii gave him a sense that a lot of different
voices and textures can sort of live together, however imperfectly, and
he would walk in many worlds and feel a level of comfort.”
said Ms. Soetoro-Ng, the child of Mr. Obama’s mother from another
marriage, who remains close to him.
“People from very far-away places collide here, and cultures collide,
and there is a blending and negotiation that is constant.”

Media commentators on CNN said that Obama did not make this election a
race issue.  Instead he emphasized inclusiveness.  He spoke about hope,
instead of fear.  He talked about working together.

To me… I think the issue is not that Obama is Black-American or
Half-White American… but he is All-American.  Barack Obama is
striving to inspire all Americans, and all humans to be the best that
we can be, and to work together by helping each other.

Barack Obama is bringing the Aloha spirit to the American presidency and hopefully to the world.