Peter's sister Margaret Gallagher has both co-hosted and performed at past Gung Haggis Fat Choy dinners.  At those events, Margaret would help us lead the singalong “When Asian Eyes Are Smiling,” then we would sing a round of “When Chirish Eyes Are Smiling” – just for Margaret. 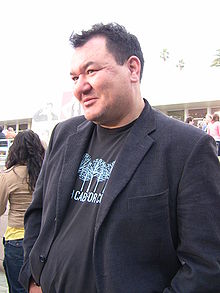 Here is a picture of Peter Gallagher participating in a public
service announcement to help promote awareness for the needs of at-risk
youth.  Here’s more about it on the Trueblood website:

You've seen Patrick Gallagher on tv as Coach
Tanaka in Glee, and as Det. Joe Finn in Da Vinci's Inquest, also as
Atilla the Hun in Night at the Museum, Gary the bartender in Sideways
and as Awkward Davies in Master and Commander.  No longer on Glee, he has appeared on Trueblood as the vampire bartender named Chow.  He has also been recently seen on Hawaii 5-0 and Battlestar Gallactica.  Patrick is now a regular on the new Canadian show Endgame, on Showcase this spring, and also has a recurring role on Men of a Certain Age.

I've known Patrick for many years, we would bump into each other at theatre events and around town.  Patrick was a comedic great in the Marty Chan play, “Mom, Dad, I'm Living With a White Girl.”  He also performed in the touring production of Naomi's Road, a theatrical presentation of Joy Kogawa's children's novel, based on her Obasan.  A few years ago, I going for lunch on Robson with Joy Kogawa, and we bumped into Patrick.  While he had performed in Naomi's Road, he had never met the author.  I was pleased to be able to make the introductions.  And so… it is very very fitting that Patrick Gallagher is now a co-host for Gung Haggis Fat Choy, as we help to raise funds for Historic Joy Kogawa House, as well as Ricepaper Magazine and the Gung Haggis dragon boat team.

And…. even though Coach Ken Tanaka didn't get a singing spot on Glee, I think we can offer Patrick a singing feature at our Gung Haggis Fat Choy dinner… as well as a kilt to go along with his fanny pack – which is really just a multi-purpose sporran!
What do you think? Utili-kilt for Patrick?

Here are some links to Patrick Gallagher: