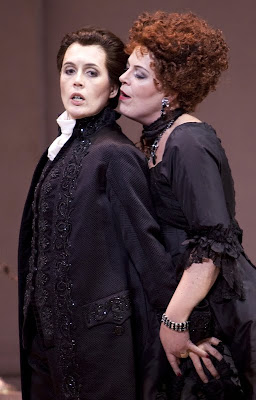 Expect an evening of subtlety and sublime beautiful music.  No big action scenes or over the top drama of people taking 10 minutes to die.  It's a salon-style opera with beautiful and exquisite Mozart music.  Do pay attention to the costume changes, and the spiritual metaphor of the Greek-style chorus.  Also keep your eyes open for gender bending roles, as castrato singers are now non-existent, but replaced by female sopranos.. The story is about the “clemency” or “mercy” of Emperor Tito.  As he strives to be a leader for all of the empire, valuing forgiveness and belief in the goodness of others, he faces the ultimate challenge – the betrayal of a loyal friend, and a chosen consort.

An All-Canadian cast give strong lead performances as Toronto's Krisztina Szabo as “Sesto”, carries out the wicked revenge plot of New Brunswick's Wendy Nielsen as Vitellia against Edmonton's John Tessier as Emperor Tito. The roles of Sesto and also Servilia (Campbell River's Kathleen Brett) were originally written for castrati males, but now played by female mezzo-soprano and soprano, made for some interesting gender bending romance.  As in traditional Chinese opera, female roles were traditionally played by males, because “only men knew how women should act”, according to the line in the David Henry Hwang play and movie “M. Butterfly.  Technically, the roles are male, but it's interesting to play with a female + female context.  And of course we go to opera for the music!  But in a town such as Vancouver with a large GLBT population, this is a good market for such a piece.

Vitellia has her eye on the crown of the empress, and has been passed over by Tito several times, in favor of other women such as  Servilia.  She takes advantage of Sesto's “love” for her, and asks Sesto to murder Titus.  But before this can happen, Servilia admits to Tito that she is actually in love with Vitellia's brother Annio (Calgary's Norine Burgess – in the 2nd castrato role). This is all acted and sung out in lovely tension-filled arias, as the plot unravels up to the intermission. Picture of the Chorus costumes, while taking bows, from the Vancouver Opera flickr stream.

The chorus is presented in the style of a editorializing Greek Chorus, that comments on the actions and thoughts of the lead characters as if they are the gods, that these Romans blame or pray to.  Interestingly, they are dressed in toga-like robes of saffron, orange and reds that would seem to be more commonly found on an ashram in India.  A gold dot also adorns the forehead of each chorus member.

The background of this rarely performed Mozart opera is very interesting.  Not as bombastic as Don Giovanni or The Magic Flute, or as full of musical flurries such as Cosi Fan Tutte, La Clemenza di Tito is a delight in its subtlety.  Supposedly written in three weeks while Mozart was ill, and while he was still working on the Magic Flute.  It was a rush job, for the coronation of Emperor Leopold II as the new king of Bohemia.

The libretto was adapted from a fifty
year old work by the Viennese court poet Metastasio (Pietro
Antonio Domenico Trapassi) that had already been used many times by
other composers – but as I sat in the theatre, all I could hear was Mozart.  From the opening bars of the overture, it reminded me of how much Mozart has meant to both my musical education and pleasure.  It recalled the days of my youth when I played Mozart's Titus Overture in an accordion ensemble, and in my college days, when I performed the Sallieri soliloquy from the Peter Shaffer play “Amadeus.”  And like so many of the audience, I became lost in the beauty of the music, as the orchestra dissolved to the simplicity of a solo piano forte performed by Conductor and musical director Jonathan Darlington, accentuated by solo cello, clarinet or basset horn. We were very pleased to see the soloists from the orchestra, Ari Barnes, Mary Backun and Caroline Gauthier brought up on stage for bows along with Chorus Director Leslie Dala.

Check out the wonderful videos from the Vancouver Opera website
http://www.vancouveropera.ca/la_clemenza_di_tito.html

Last week CBC Radio One was discussing the opera audience as white-haired and caucasian (which I don't fit into – okay maybe the age demographic since I turned 50 last May).  The Vancouver opera is very aware of trying to reach a more culturally diverse audience.  While some of the bloggers commented that it was a very mixed ethnic crowd on opening night Saturday on Feb 5th, the audience that I saw on Tuesday Feb 8th, was very white haired and caucasian.  But I did see a number of gay and lesbian couples.

Cultural diversity can take many forms.  If the opera does want a more ethnic mix in the audience, the best route to go is to feature more ethnic leads in key roles, not just in Madame Butterfly and Turandot, or Nixon in China – but in all productions.  Afterall opera in Hong Kong, and Japan feature Asian singers in many roles.  The costumes in La Clemenza di Tito were 18th Century, while the opera is set in Ancient Rome.  In the first half, the principles are wearing black, in the second half they are wearing white.  The chorus appears to be wearing South Asian style religious robes, all in the name of artistic merit – not historical accuracy.  Female singers have replaced male in the original castrato roles.  A few singers of colour in lead roles would not look out of place in this production.