Gary
Locke, is nominated by Obama to be Ambassador to China. 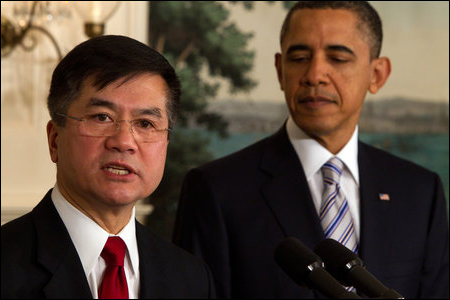 President Obama nominates Gary Locke as the next U.S. Ambassador to China.

I have always had an interest in watching Gary Locke, former Washington State Senator.  He has been the highest ranking Chinese-American in politics.

I am related –
because Gary's cousin Paul married my grandmother's cousin, who is my
Auntie Carol, whom I have often visited in Seattle.  Sometimes Auntie Carol would tell me about the election results.  She was always happy and supportive, as she had also been an administrative assistant for Gary Locke.

It's a proud moment for Asian-Americans, but Locke
criticized for being both “Too Asian” and “Too American” for others…
raising issues about race, national identity and patriotism – in both
China and the USA. Locke's grandfather immigrated to the US over a
century ago and Locke, a Yale graduate, has done much to help advance
Asian-Americans and the civil rights movement.
Here's some interesting stories about Gary Locke