There is a big hole in Vancouver to start off 2012.  Favoured son Milton Wong passed away on December 31st, 2011.  There is plenty to say about Milton's business acumen, but much more to say about his community and philanthropic work as well.  For the past year he battled pancreatic cancer, but he was also recognized by being given the rare honour of the Freedom of the City Award in July.  He also received  the Vancouver's Mayor's Arts Awards for philanthropy in October, and in November he was named to be inducted into the 2012 Business Laureates of BC Hall of Fame, ceremonial dinner for the spring.

I listened to CBC Radio this morning, and heard his friend Michael
Clague speaking, followed by my Uncle Ian – one of his life-long
friends. Milton had been best man at my Uncle Ian and Aunt Sylvia's wedding. During the interview, Ian had shared some of his memories about his friend.

Milton always had a smile for me, and it has been a pleasure
to know his brothers and their families. There are many news stories about Milton Wong's achievements.  For this article I will focus on personal connections between our families.   I first got to know him over the
years of his involvement in the Vancouver Dragon Boat Festival, which
he helped to co-found.  My friend Sonny Wong, was doing marketing for the Festival, and introduced me to Milton, who of course knew of my parents, and my family.  My father grew up down the street from Milton's family, in Strathcona and remembers playing kick-the-can with Milton's older brothers William and Jack.

The more involved into the Asian-Canadian community, the more I would learn more about all the family connections and friendships.  Milton was also a founder of the Lotus Sports Club.  There is a boat named M.K. Wong at the Lotus boat club house. His nephew Peter was also member of the board for the Canadian International Dragon Boat Festival Society.  Lotus Sports Club at Barnet Marine Park in Burnaby, was the first place I learned to dragon boat, and I have made many friends there over the years, and always support their dragon boat regatta in May.

Through Asian Heritage Month Society, I go to know Beverly Nann who also grew up in Strathcona with Milton.  Both would receive the Order of BC for their community service.  Another connection with Bev was that her mother and my maternal mother had been best friends.  Bev also would encourage me in my endeavors, and shared about her work with Milton in co-founding the Laurier Institution, a think tank for cultural diversity.

“Milt—as chair of Laurier
Institution emphasized the importance of education, dialogue and
debate on issues creating cultural tensions in Canadian society,” Bev shares with me.  “Laurier's
research on 'Prospering Together' on First Nations communities in BC
precipitated Milt's major interest and involvement with the
First Nations groups.  I believe Milt's personal experience
of racism in his business career also fueled his determination to address the issue of racism.”

It was amazing to learn about Milton's community work through so many people.  Both Beverly and Milton are community leaders and inspiring role models who lead by example in helping to create the world they want to live in, and which embraces cultural diversity. The more
involved I got in the community, the more I learned about Milton, and
would bump into him. I also got to know
the Paddling the Wong Way Dragon Boat Team, over the years through
friendly competition and shared activities, such as carving dragon boat
heads in 2008 for a special project.  When the Wong Way Dragon
Boat team folded, Milton's nephew Steven came onto our Gung Haggis Fat
Choy dragon boat team, and has become an important part of the team,
providing leadership and assistant coaching.  One year, we honoured William Wong, Milton's eldest brother, as an honourary drummer.

I had always known about the Modernize Tailors shop in Chinatown, and that had belonged to the Wong family – but I also knew that my Uncle Laddie worked there too.  A few years ago, CBC created a television documentary about the family history, called Tailor Made http://www.cbc.ca/thelens/program_120208.html.  The documentary also showed that Modernize Tailors was moving back to its' original site in the Chinese Free Masons building across the street from the present site.  Milton had bought the building and was now restoring the building where his grandfather had founded the store, and adding seniors housing to the top floors.  Interestingly, I discovered that it was my architect cousin Joe Wai (another early role model for me, who also designed the Dr. Sun Yat Sen Chinese Classical Gardens) that was overseeing the renovations to the Chinese Free Masons building. It was great to learn more about the humble beginnings of the store, as well as the racism faced by brother tailors Bill and Jack Wong, who only turned to tailoring after going to UBC Engineering, and not getting jobs in their field – just like my father's brother Gilbert.  Tailor Bill Wong always tells me to say hello to my parents and Uncle Gilbert. 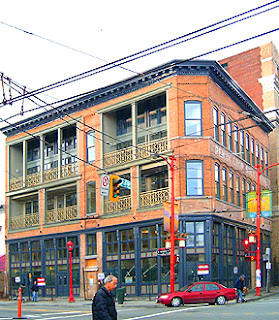 Modernize Tailors is in the newly restored Chinese Freemasons Building, on the corner of 5 West Pender and Carrall St., in Vancouver Chinatown.

And through the years, I would see Milton at some of the various
Chinese-Canadian community projects from the 1986 Saltwater City project
to last year's film screening of C to C: Chinese Canadian Stories of
Migration film, at the Milton & Fei Wong Experiemental Theatre at
the SFU School of Contemporary Arts.  And I would smile and know that somewhere he had a part of making it happen, directly or behind the scenes…

After reflecting on his death and what he brought to the community, I think I would create a New Year's Resolution to give like Milton…. to volunteer and donate to community… to recognize and share time with friends and family… and to to always remember my family roots… and to look to the future.
Here are some of the news stories about Milton's life on his passing.

Here's
a good in-depth story about Milton Wong's life philosophy, as retold by
his niece Joanna Wong, and how he inspired and mentored others… + a
quote from me.

Milton Wong, a tireless philanthropist, brought a lot to the table

This is a good story with interview by Joanna Wong, Milton's niece: