What is Idle No More, and why does it affect Canadians? and my family?

For the past few weeks there have been lots of postings about Idle No More on the Facebook pages of mostly my First Nations friends.  But when my cousin Shelley attended the rally at Peace Arch Park on Saturday January 5th 2013, I asked her to write a posting for this blog.  I wanted her to write about her personal experience.  Her resulting story is very poignant and underlies the importance of the Idle No More movement, and what it means to the new generations of First Nations Canadians.

Shelley’s mother Rhonda Larrabee and my mother are cousins.  We both share the same great-grandparents. Our great-grandmother Kate Lee was the daughter of Rev. Chan Yu Tan, who came to Canada in 1896.  Shelley’s maternal grandmother Marie Lee Bandura, was the last First Nations child to live on the Indian Reservations of the Qayqayt Band, that have long since been taken over by the sprawl of the City of New Westminster.  By 1913, when the Federal government seized most of the remaining Band’s reserve lands, most of the area’s First Nations and Chinese people had already been forced out of New Westminster, due to racism.  In 1994, Rhonda Larrabee single-handedly re-established the Qayqayt First Nations. There have been two films made about Rhonda Larrabee’s efforts to reestablish Qayqayt First Nations.  Tribe of One is made by the National Film Board of Canada in 2003. One Woman Tribe aired on the CTV television network in 2008. Powerful!  That is the best way I could express my involvement of the Idle No More protest at the Peace Arch Provincial Park in Surrey today.  I am Shelley Ferguson from the Qayqayt First Nation.

My tribe had been kicked off their lands almost a century ago because we were too close to the Royal city. So, I was not raised with any of my traditional indigenous culture.  With no one of the original band still alive, our traditions have been long lost.  I am currently a student at a First Nations college.  Subsequently, it has only been the past few years that I have truly started to take a deeper interest in my First Nations issues and culture.

I have never had an interest in any type of politics before a few weeks ago. That was when I spoke with my classmate Steven Kakinoosit. He spoke about our human rights be ripped away, our natural resources’ left unprotected for companies to exploit, and.. a revolution (Idle No More).  I had a hard time believing that something like this would happen here in MY Canada but I was enthralled by his passion for the cause. Therefore, I started doing some of my own research.  I had found that everything Steven had said was the truth.  I sat disgusted with everything I was learning in such raw details.

Bill S-212 says that reserve lands can be sold to the general public.  This means that large companies can buy directly from individuals instead of getting approval from the entire band.  They can throw large amounts of cash to people who are living below the poverty line, to companies like Enbridge, and use the land any way they see fit. Bill C-27 says the failure to make business information public can result in being taken to court and having funds to the community cut off.  Currently, if leaders speak up, they risk having finances decreased. Bill C-45 is the most shown symbol on protests signs because it prevents any debate or Grand Chiefs to present views of amendments they are imposing.

I felt I had no choice but to join the fight and be Idle No More. On the day of the Peace Arch protest, I had no ride to get to there.  Therefore, I was prepared to spend the day at home.  I had planned to putter around the house while checking my facebook for any updates of the protest.  I was ecstatic when I got a call from my friend, Roberta, asking me to ride there with her.  We went to the Aboriginal Friendship Center on Hastings St. in Vancouver, and made several signs to bring with us.  There was a convoy of about a dozen vehicles that headed to the rally from there. We were all in a row with our hazard lights on, flags waving out the windows, and honking the horns.  It was awesome!  On our journey, we saw an eagle flying over the convoy and I’m sure everyone felt that was a blessing that we are on the right path. The clouds may have remained dry but the grass was wet and soggy. Thankfully, that didn’t damper the throng of people from singing and cheering.  You could see the joy on people’s faces from having so many people in attendance.  The buzz in the air was one of brethren and purpose as we marched to pass under the white arch.

We sang all sang the women’s warrior song while walking and I suddenly realized, this was my first time actually walking under the arch. I whipped out my phone to take pictures but all too soon I was through to the other side so quickly.  The moment of being disappointed lasted about half a second because I saw people from every race before my eyes standing together as one.  Many were singing, several were laughing, and a couple were holding hands.  The feeling of awe was over powering.  I couldn’t wait to hurry my feet through the muck and be a part of it all. 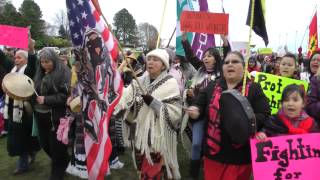 One thing that was sorely needed was a sound system.  It was hard to hear from the middle and back of the crowd.  My friend and I finally ended up wiggled our way a few rows from the front so we could kind of hear the speakers.  They spoke of the responsibility to consult and honour treaty rights, of the land protected under treaties to be given to non-First Nation people, and of taking pride & fighting for our rich cultures.  The stories and knowledge that was passed to everyone was nothing short of inspiring. Seeing as we were in Coast Salish territory, they asked for the Coast Salish people to come to the center and have the honor of the first song.  Roberta and I are both Coast Salish.  She grabbed my wrist and started to haul me to the front of the circle.  My first instinct was to panic because I do not know their songs and squeaked that out as fast as I could.  A woman I passed had heard me and laughingly told me to fake it.  I did not feel like I had the entitlement to be there.  I couldn’t join in song.  I was never taught our culture.

“You are Coast Salish,” Roberta said as she looked me in the eye, “You have every right to take your place up here.”  I wish I could describe the feeling of being unquestionably accepted to a world I usually watch from a distance, like through a piece of glass.  Just trying to find the appropriate words for this story causes my eyes start to water. I have to admit, that was the highlight of my day. When my cousin, Todd Wong, asked me to write a few paragraphs for him, I had planned to write about all the injustices that PM Harper is imposing upon my First Nations brothers and sisters.  About the First Nation people having the strength and power within us to stand up for what is right.  Against a man (PM) who passes laws which are offenses against the Treaty acts made with the Queen and are inconsistent with the United Nations Declaration on the Rights of Indigenous Peoples. Which are all extremely valid points but this movement is about more than just politics to me.

For me, it is also about discovering the richness and beauty of my heritage, seeing firsthand the pride and joy that traditions are being done correctly, and feeling like I found my place that I belong. My one hope is that no children have to go through what I have to feel like they belong. I am IDLE NO MORE!!!

For more thoughtful readings on Idle No More please check these links.