Gung Haggis Fat Choy has grown and expanded over the years, since the humble origins of 16 people in a townhouse living room in 1998.   My friend Sid Tan has just posted a video of the 2003 dinner, and is making me feel nostalgic for these earlier simpler dinner events.  For 1999, we hosted 40 people in the New Grandview Szechwan Restaurant (now torn down) on Broadway and Manitoba.  In 2002, we hosted 200 people at the Spicy Court Restaurant at Oak and 40th Ave.  In 2003 we moved to the Flamingo Restaurant on Fraser St. to host 400 people.

2003 -CBC Television regional director Rae Hull called me and suggested it was time for Gung Haggis Fat Choy to take it up a notch.  She called in television producer/director Moyra Roger to create a 30 minute television performance special titled… what else but…  “Gung Haggis Fat Choy.”  The result was broadcast throughout BC in 2004 and 2005, and was nominated for 2 Leo Awards: Best Music, Comedy or Variety Program or Series + Best Direction in a Music, Comedy or Variety Program or Series.

View Clip
Chinese New Year. Robbie Burns Supper. Gung Haggis Fat Choy fuses the two unique cultural events in a celebration of music, dance and tradition. Featuring performances by The Paperboys and Silk Road Music.
A CBC Television production.
In 2005 we moved to the Floata Restaurant in Vancouver Chinatown.  It is a larger restaurant with a raised stage of good size that vastly improved our stage show.  2007 saw the use of digital camera proliferate – I even got one for my birthday that year!  But people started bringing them to the Gung Haggis Fat Choy Dinner – and then city councilor Anne Roberts who also taught media at VCC, filmed this version of us performing the renowned poem of Address to a Haggis – as a rap song.  I am still self-consciously holding the words in my hand… 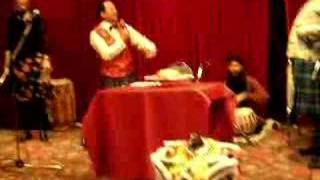 0:30
2009 – Joe McDonald and I were getting pretty good at the rap version, and the audience was beginning to expect it.  But we still have to change up things each year.  This is a great video created by my friend, and they really captured a lot of what goes on at the dinner – a fine mix of poetry, song and food – all with cultural fusion flair.  Watch this video for a surprise appearance of hip hop artist Ndidi Cascade, Silk Road Music ensemble, opera soprano Heather Pawsey, and entertainment media journalist Catherine Barr + the inaugural appearance of the Gung Haggis Fat Choy Pipes & Drums, led by Bob Wilkins. 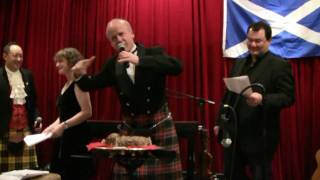 In 2011, the Black Bear Rebels celtic ceilidh group was featured.  Bagpiper Allan McMordie and I met on the Robbie Burns Day in 2008 at the Rock 101 Studio, and we have since become great friends.  He invited me to join the little ceilidh music ensemble that plays for scotch and friendship… and it was time to feature these friends onstage.  This video was made by photographer friend Patrick Tam, and he wonderfully captures the evening finale, as hundreds of guests form a huge circle and clasp hands for the singing of Auld Lang Syne.