Betty Fox – Rest in Peace….
It's
been an honour to support you and your family and the Terry Fox Run,
over the years… Thank you for standing on guard for Terry, Canada, and
Cancer Research. I have served as a Terry's Team member, living examples that cancer research has helped to make a difference since 1993, when Terry's youngest brother Darrell phoned me up and asked me to consider it.  I have spoken and run at Terry Fox Runs throughout Metropolitan Vancouver in Stanley Park, Burnaby, Simon Fraser University, North Vancouver, West Vancouver, Richmond, North Delta, and as far away as Kelowna and Beijing in China.

Betty Fox – It's been a wonder and a pleasure to meet and know you these past
years…
and your family… husband Rolly.. daughter Judith… and especially your sons Darrell and Fred.

I did what you asked me to.. help to start a Terry Fox Run
at SFU in 1994… and we created a trophy case for Terry, in which your
youngest son Darrell placed Terry's favorite SFU 1000 mile club
t-shirt. You are an angel… even though you never admitted or knew it. 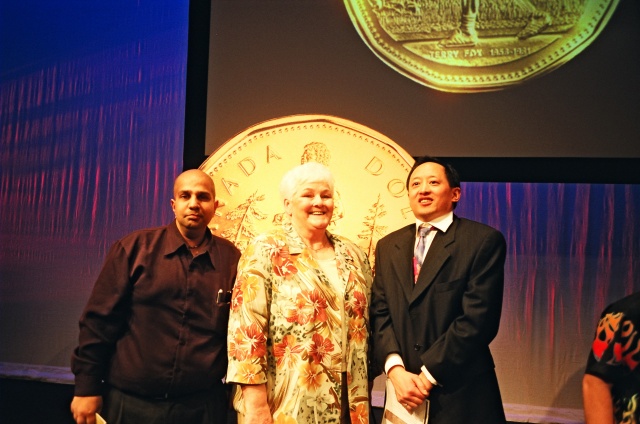 At the launch of the Terry Fox $1 coin at Simon Fraser University, with Betty Fox on March 14, 2005.   Vikram on the left is also a Terry's team member, who I first met at a Terry Fox Run in North Delta.  – photo Deb Martin 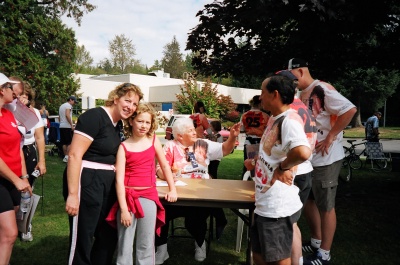 The last time I talked with Betty was at the 25th Anniversary of the Terry Fox Run in 2005.  In this photo, I had just introduced my friend Brenda and her young daughter to Betty Fox.  – photo by Deb Martin.

I really wanted to attend the Hometown Run in Port Coquitlam.  Usually, I would always go wherever the Terry Fox Run Organization BC Division would send me.  Sometimes I would speak at 3 events in a single day, such as West Vancouver, Stanley Park, then Burnaby.  But in 2005, I declined, stating I really wanted to be at the Port Coquitlam Run.  It was incredible!  There are so many people.  And the run goes past Terry Fox Secondary School where there is a statue of Terry, that you can have your picture taken with.
Here is my blog story: Terry Fox Run Day – I go to the Port Coquitlam “Hometown Run”

Earlier in May of 1993, I had been awarded the SFU Terry Fox Gold Medal,
for my fight against cancer and “dedication to society” for my
community work.  Darrell had heard me on the radio being interviewed by
Rafe Mair on CKNW.  Darrell phoned me afterwards and invited me down to the Terry Fox Run office.  I met Darrell and his older brother Fred, who was taking over the the director position.  It was a wonderful pleasure, they seemed to me to be very down to earth people.  And for the next few years, I would also go out to Port Coquitlam to have lunch with Fred, and he would give me my new Terry's Team t-shirt.

The first time I met Betty Fox was at a press conference in September 1993.  I had just agreed to become a Terry's Team member.  Darrell was then director for the BC/Yukon Division.  The press conference was at the BC Sports Hall of Fame at BC Place Stadium.  I was a guest speaker along with Betty, Rick Hansen and Terry's former highschool basketball coach.

At the time, Betty was really urging me to get a Terry Fox Run going at SFU.  Darrell would also encourage me saying, “Todd, it just takes one person.”  I tried my best, and I went to see the then-athletic director Lorne Davies, who had been at SFU when Terry was a varsity basketball player and diagnosed with cancer.  I was able to go back to Darrell and say, “Darrell, there isn't going to be a Terry Fox Run in 1993… but there will be in 1994… and it's going to be bigger than we imagined. There's going to be a Terry Fox Day.”

Here's a link to the CBC TV news story + video story, about how she supported the Terry Fox Run Foundation and what it meant to her.
http://www.cbc.ca/news/canada/british-columbia/story/2011/06/17/betty-fox-death.html